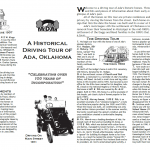 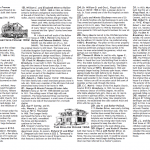 Welcome to a driving tour of Ada’s historic homes. Through the design of the houses and bits and pieces of information about their early owners we will give you a
glimpse of Ada’s past. All of the homes on this tour are private residences and we ask you to respect that privacy by viewing the homes from the street. Each home on the tour was marked with a sign that lists the date the house was built and its owner at that time. Ada’s roots began with the settlement of Chickasaws to this area following their removal from their homeland in Mississippi in the mid-1800’s. However, it is with the settlement of the Daggs and Reed families in the 1890’s that Ada began to take shape as a town.

Acknowledgements
Research for this project was done by members of the History Club: Brenda Tollett, Billie Floyd, Alberta Blackburn, Suzanne McFarlane, and Nedra Sears.
Thanks is extended to the owners of the homes on the tour for permission to feature their homes, to members of the community who supplied information and reference photos and to the Ada Evening News for use of newspaper files as a source of information. Publishing, signage, and other features of this project have been supported by the Centennial Commission.
Sketches by Nedra Sears. Original Photographs taken by Mapes. The map for this tour was designed by Nelson Dobbs under the supervision of Dr. Mark Micozzi of the Department of Cartography/Geography at East Central University in May 2006. This brochure was designed by Ann Miller of the Ada Jobs Foundation in June 2006.
August 2006.